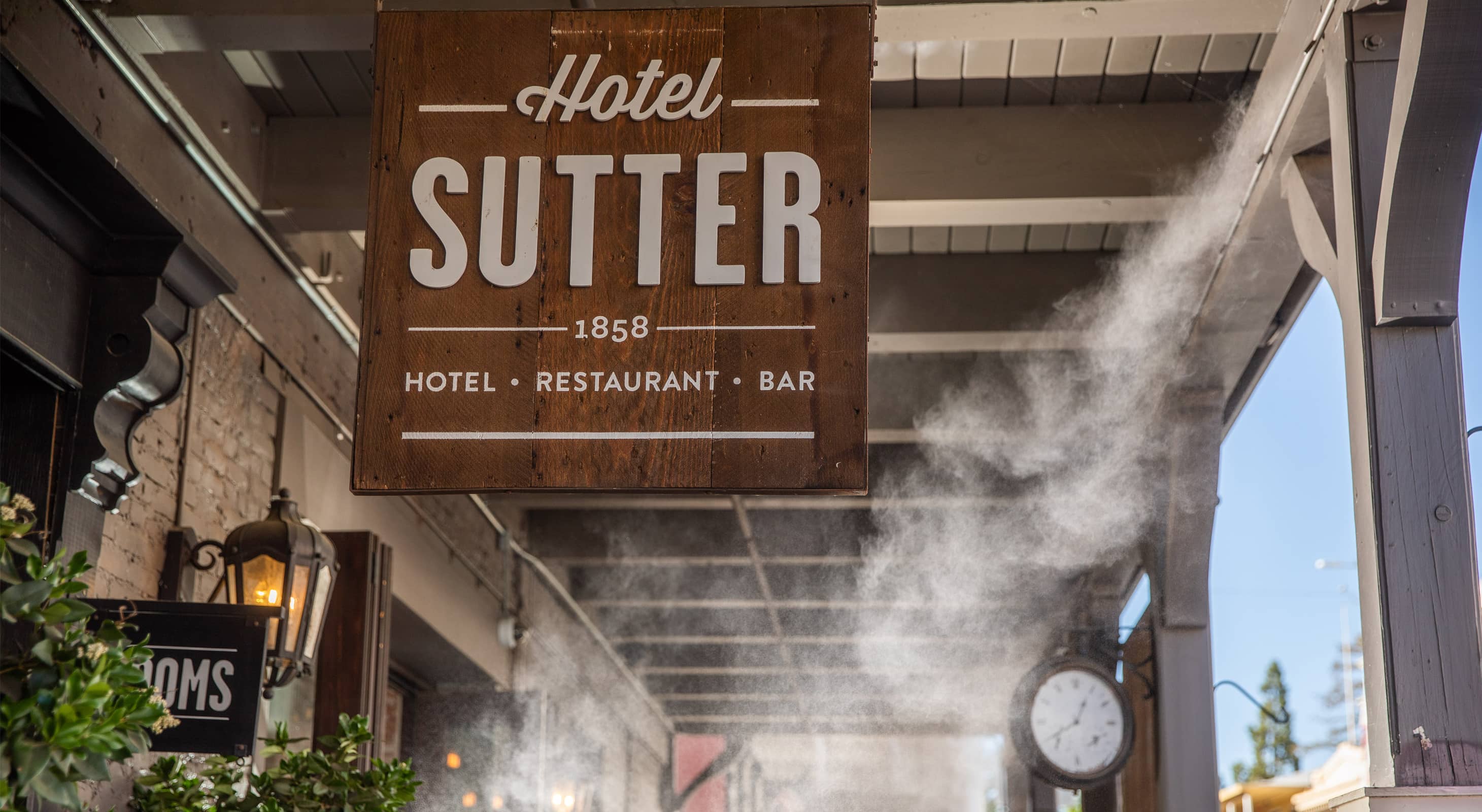 Hotel Sutter has been intertwined with the rich history of Sutter Creek from the very beginning. From the town’s Gold Rush origins to our modern, wine country luxury, we proudly carry on a historic tradition of excellence. 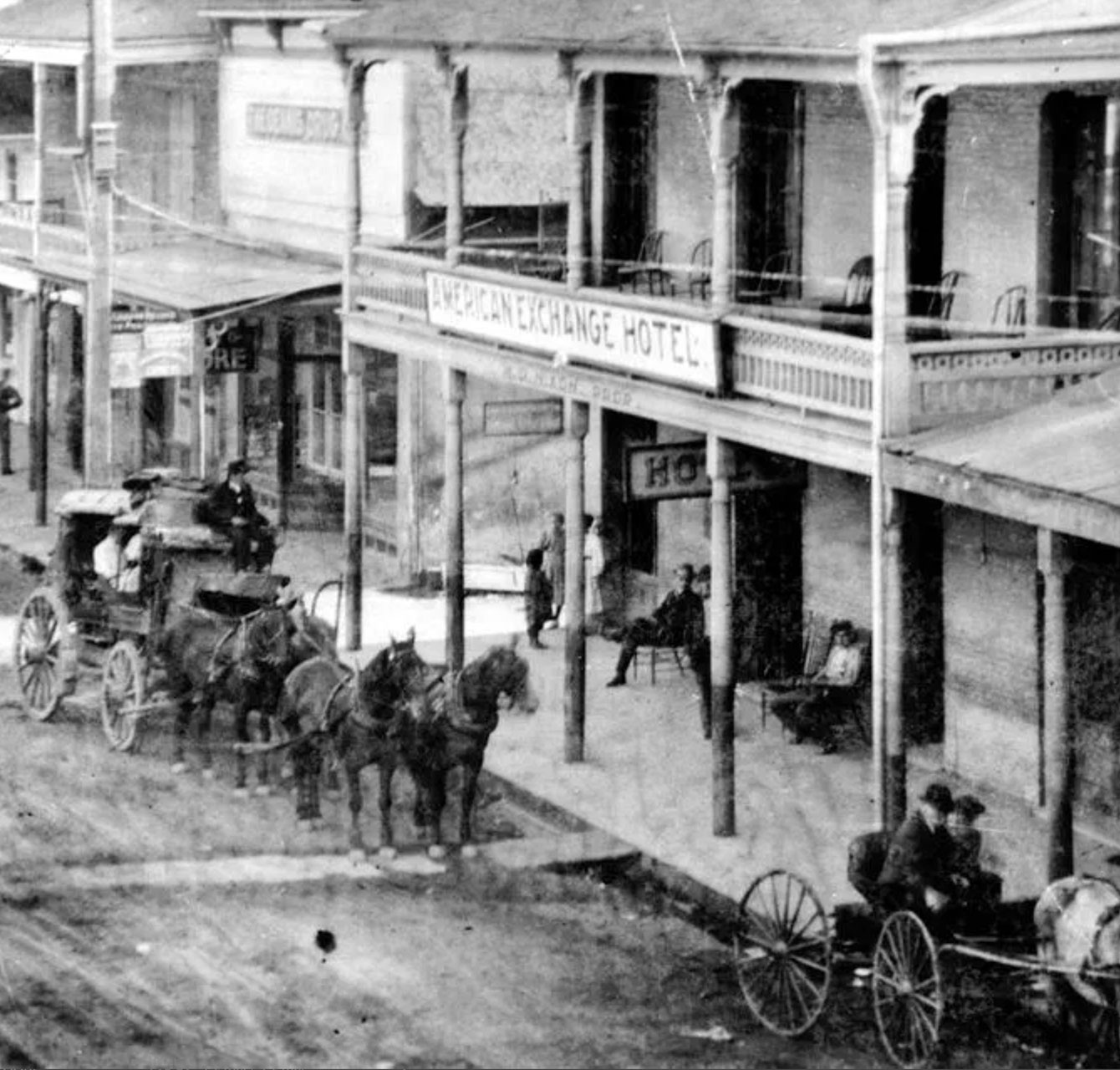 Surround Yourself in History

The Hotel Sutter’s earliest incarnation was the American House, built on this site in 1852. During the height of California’s Gold Rush, the property served as both a stage stop for the Adams & Company Express and a central meeting place for locals to catch up on the day’s events. With the fire of 1865, nearly all of Sutter Creek’s business district burned to the ground including portions of the American House, which was rebuilt as the American Exchange Hotel.

Our Sutter Creek hotel proudly carries on its tradition of hospitality into the modern day through its 21 uniquely-appointed guest rooms and our elegant banquet room. Our hotel’s refined charm, rich history, and prime location in wine country have likewise upheld our building’s legacy, helping Hotel Sutter grow into a popular destination for locals and travelers alike.

A Heritage of Hospitality

See How Sutter Creek and Hotel Sutter Have Grown Together 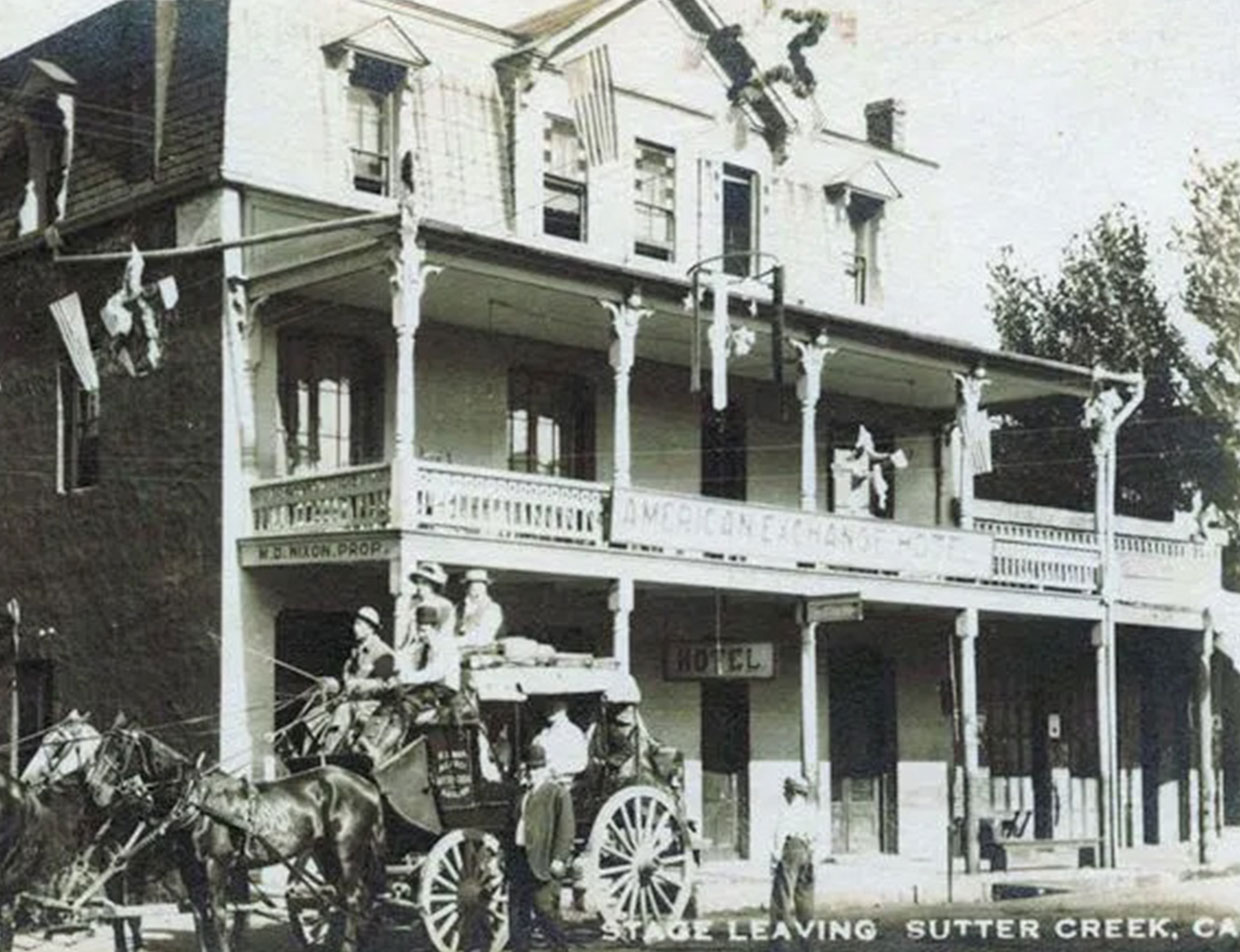 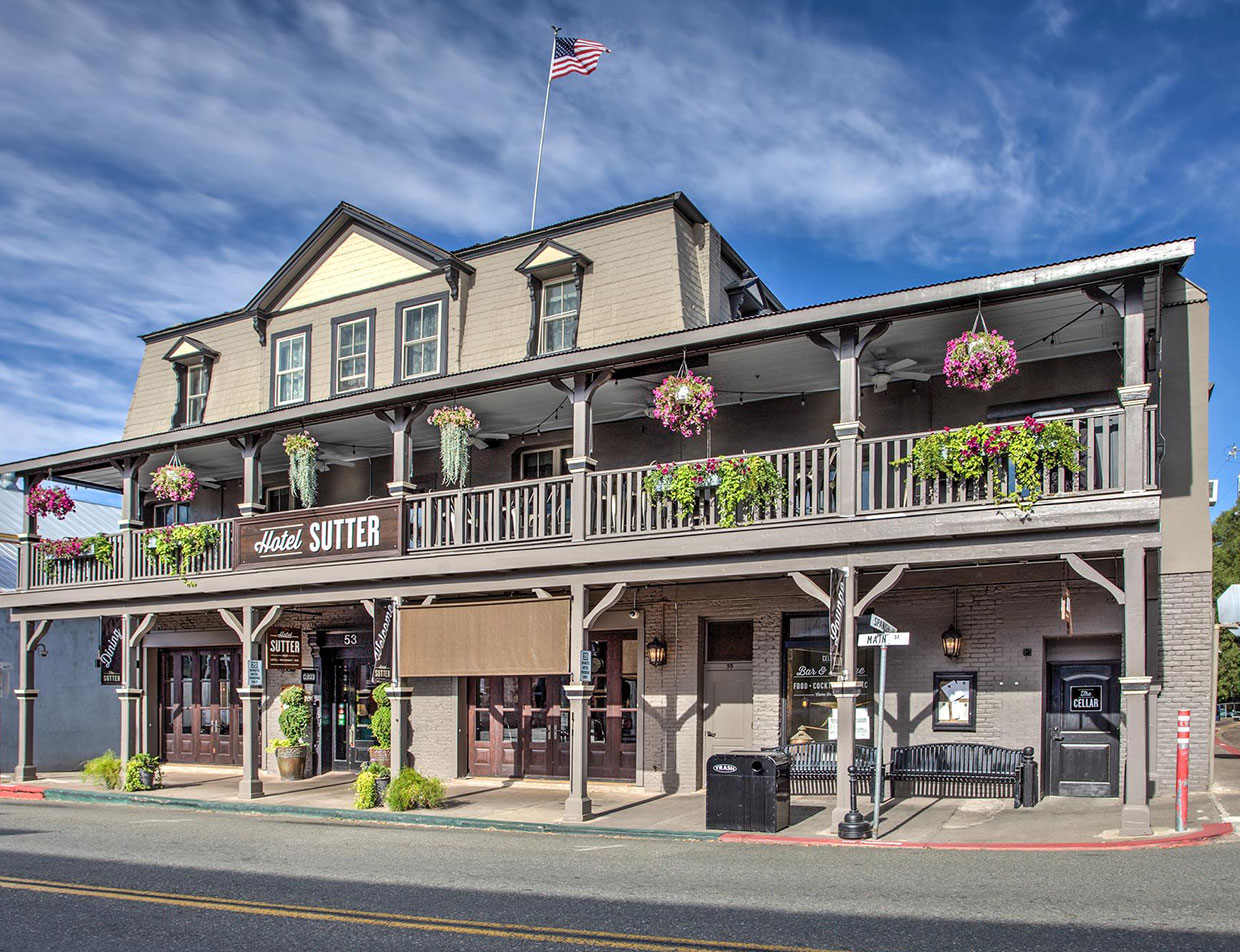 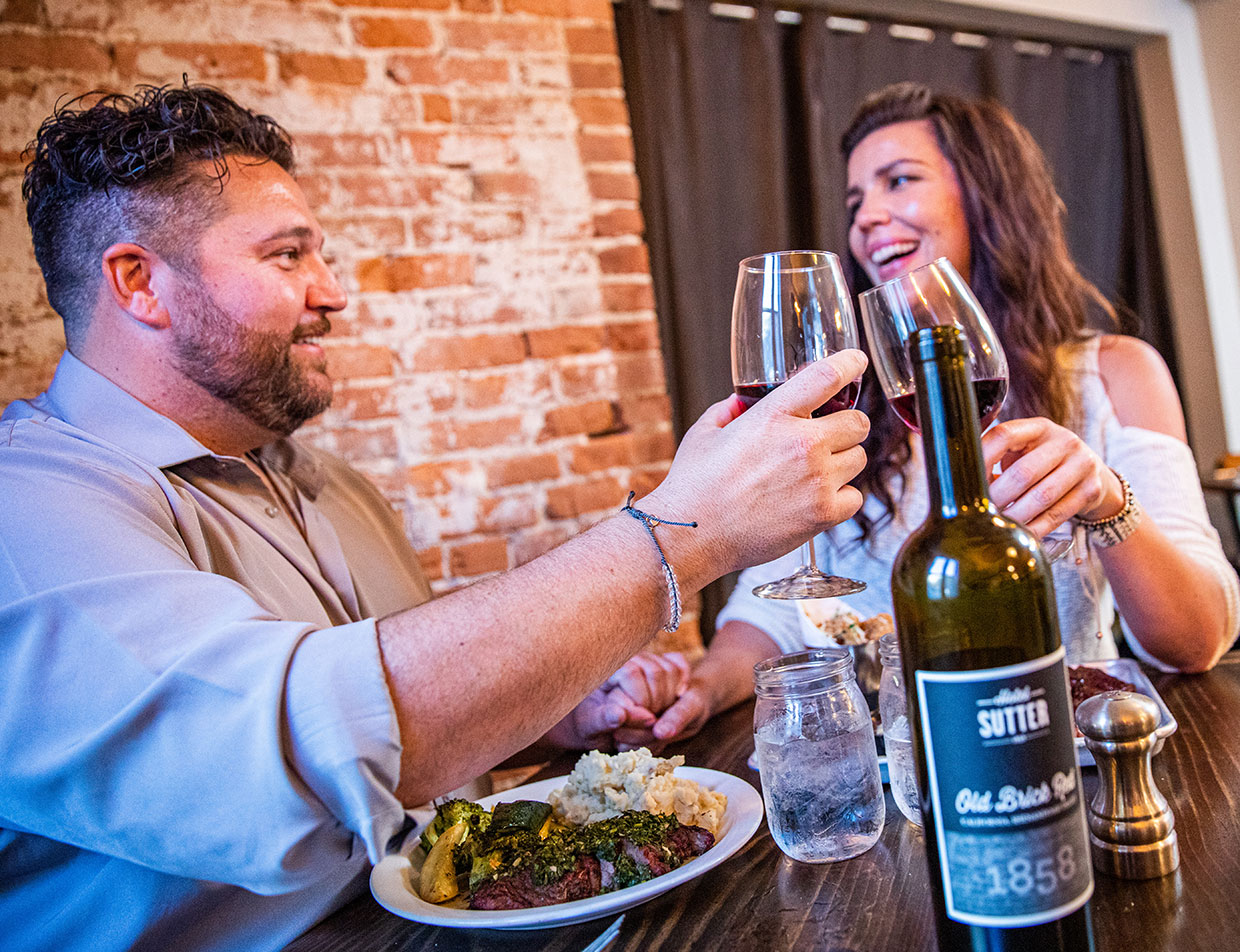 The Founding of Sutter Creek

Sutter Creek was founded by John Sutter between 1844-1846. He came here for the lumber and established Sutter’s Mill; however around 1846 John Marshall found gold at Sutter’s Mill. John Sutter tried to keep it quiet as gold mining would destroy his lumber business and his land. However, by 1850, it was well known that Sutter Creek was rich with gold. John Sutter tried his hand at gold mining but was greatly disliked amongst the other miners because he used employees and servants to do his mining for him. As a result, he left his land and his opportunity and went back to what we now know as Sacramento. With the large influx of people, Sutter Creek soon became a town, but  with fires and the ever-depleting gold in the mountains and streams, the town faced many hardships.

The Hotel Sutter has a long and proud history. First built some time as early as 1852 it has since burned down 2-3 times; and finally rebuilt as a brick “fire proof” structure. Through the years Hotel Sutter has been many things from a coffee shop to the hotel that it is today. It has been renamed many times; at its earliest it was known as “The American House” and at its most memorable “The Bellotti Inn” and today “Hotel Sutter.” The hotel has many stories to tell from cowboys and gold miners taking their horses up to their rooms with them to many ghost stories. The hotel has seen murder trials, bar fights, fires, and so much more. You can even see some of its story in the walls from where old doors and windows used to be and the plaster that used to cover our beautiful brick walls. There are even rumors about old tunnels that have since been filled in, being used during Prohibition to smuggle alcohol all across town.

In the 20’s, because of Prohibition, Sutter Creek almost became just another ghost town. With miners finding it harder and harder to find gold and the ban on their favorite pastime, drinking, gave them less to do. Locals started to flee until the mid 30’s when people realized that the Plymouth and Sutter Creek soil was perfect for growing wine grapes. However, until the end of Prohibition our vineyards were only able to survive because the owners were able to sell the grapes for religious purposes. Congress allowed wineries to produce sacramental wines for religious purposes or medicinal use. This allowed many wineries, including Beaulieu, Beringer, and Wente who produced sacramental wines, and most commercial vineyards to stay in business. Since then Amador County has earned many awards and world wide recognition over the years with its most famous varietal, Zinfandel.

The Legacy Lives On

Today Hotel Sutter is a destination for wine enthusiasts, corporate retreats, and beautiful weddings. Hotel Sutter has been here since before California has been a state and was the first permanent building in Sutter Creek. Sutter Creek continues to show us that it is willing to adapt to changes to survive and flourish. There is no doubt that the hotel and town have seen many exciting events over its 160+ years. Some of its stories told, some untold, and some exaggerated, but one thing is for sure the hotel is an institute that can stand the test of time, and will continue to have more fascinating stories to tell in the years to come.